NEW AGAINST OLD
WHY THE MODERN GOLFER CAN HIT SO LONG

Due to the development of modern equiptment especially with the introduction of superlight graphite and titanium clubs it has become possible for a golfer to retain their playing capabilities even into a ripe old age.

However, the huge distances achieved by the Pro´s these days is also to do with the modern swing.

The old style played with a wooden club was as follows,

Stand in the address postion as wide as your hips. (Pic 1) On the backswing the head must remain over the ball, not moving at all. (Pic 2) The head remains still on the through swing. (Pic 3) This way of swinging was stable but required arm strenght, great hand speed and release out of the wrists in order to hit the ball long distances. Not everyone of course has this capability and thus back in the 80´s any club golfer who could hit the ball 200 yards (182 meters) was classed as a long hitter.

These days with modern clubs a relatively high handicap player can hit it 200 yards without much problem. The modern day Professional however hits a drive on average 300 - 330 yards. (275 - 290 metres) The reason is a combination of material and technique.

Today the golfer address´s the ball with a much wider stance. (Pic 4) The upper body rotates fully over the right leg. (Pic 5) The upper body rotates fully through the shot ending up fully over the left leg. (Pic 6) This new movement can be compared with other dynamic release actions such as a Javelin thrower with the whole body being involved in the movement and release, not just the hands and arms. This technique, combined with modern material is the reason the Pro´s hit the ball such awesome distances today. 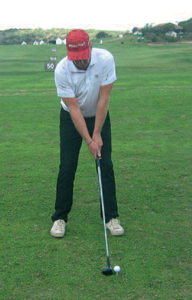 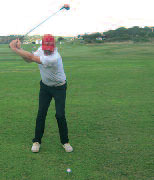 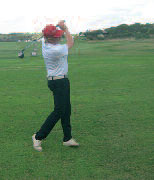